What to Expect When You’re Spectating: Kona Ironman World Championship

With Kona World Championships just a few days away on Saturday, October 13th, here’s my spectator’s guide to give you a preview of what you can expect when you’re Kona spectating. 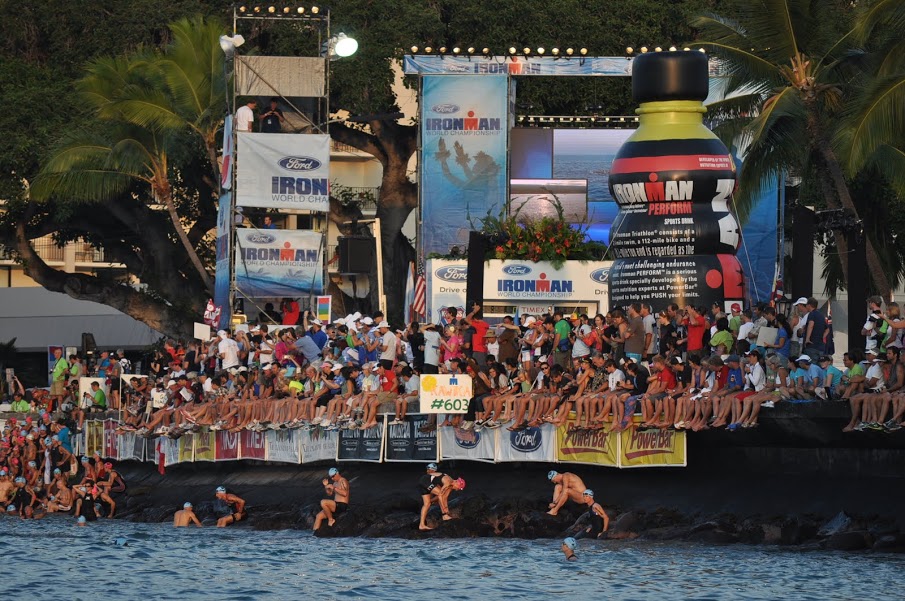 If you’re at all daunted by the task of spectating Kona, let me reassure you that among the handful of Ironmans I’ve spectated, Kona has to be the most relaxed and spectator friendly place to be. There’s this infectious buzz of nerves and excitement mixed with the ocean air. Everyone is extremely friendly and it’s easy to get around.

I’ve spectated Kona twice. The first in 2010 with my husband’s family (including my 4 year-old niece) and last year where I spectated alone. During both years I primarily stayed on Alii Drive–the main artery of the race–where the race starts and finishes. There are plenty of restaurants, bars and shops to keep you occupied and cool from sticky mid-80s temps. Refer to my Tales of an Ironman Spectator article to help you pack for the long day, what to wear, camera tips, and determine how long you should stay during each part of the race.

– The race ends at midnight. Mike Riley the voice of Ironman, will only say “You are an Ironman!” if an athlete finishes during the midnight cut-off.

Now with the details. 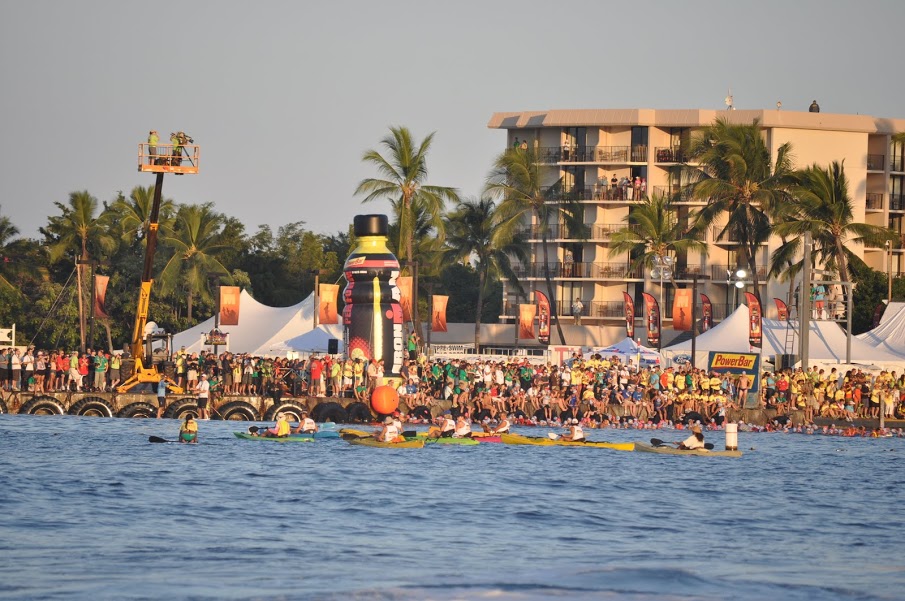 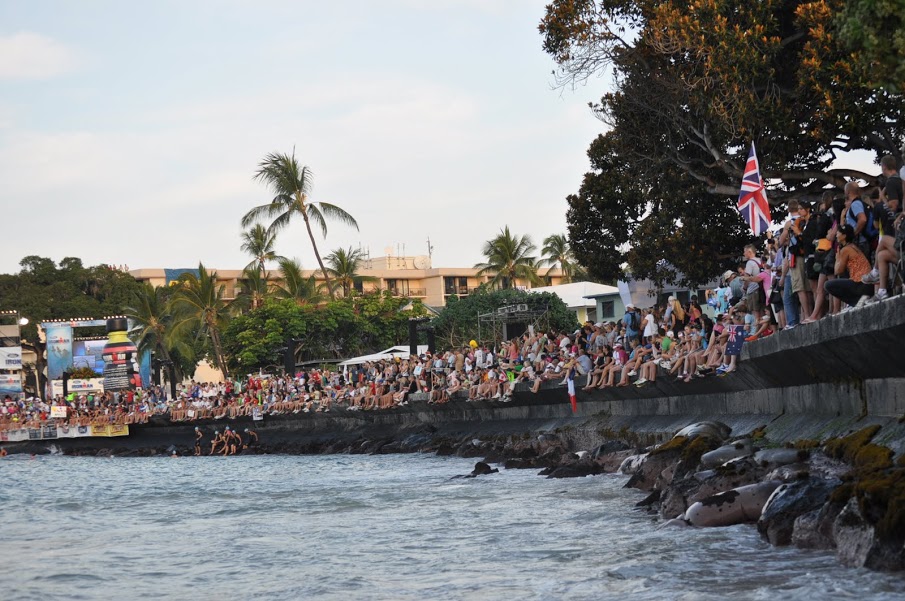 SWIM START 7:00am: It’s an incredible  scene to witness about a mile of spectators perched alongside the ocean’s ledge. You’ll need to arrive at least 2 hours beforehand to find a good spot near the swimmers. But don’t worry too much if you’re not as close as you’d like to be because once that cannon boom ignites, you can follow the swim course all along Alii Drive. Even if you’re sitting or standing about a ¼ mile away, you can still get a decent view of  the swim start. As the swim progresses, keep following the swimmers along the ocean view from Alii Drive. Last year, I walked approximately a mile from the swim start to the hotel lobby of the Royal Kona Resort  (where we stayed) next to Huggo’s restaurant and bar. 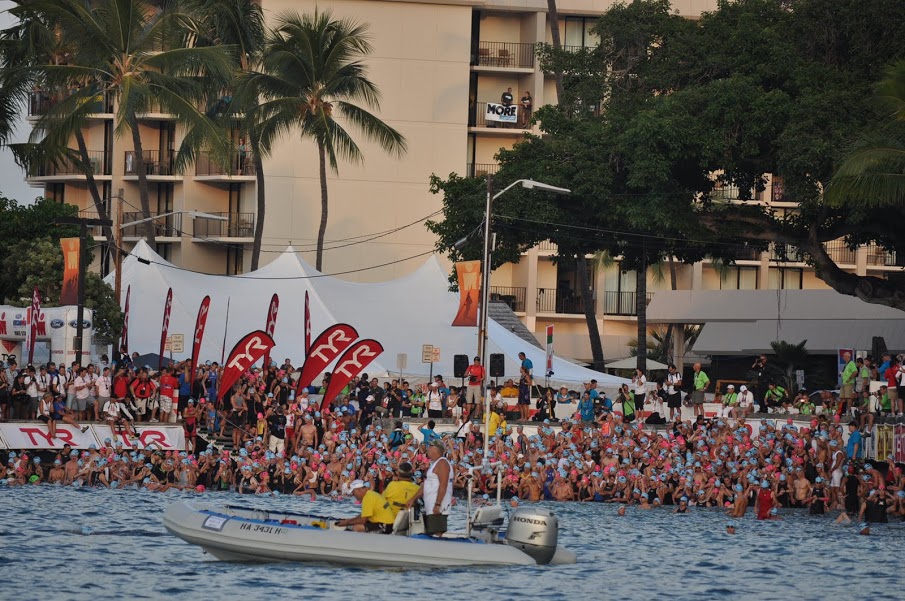 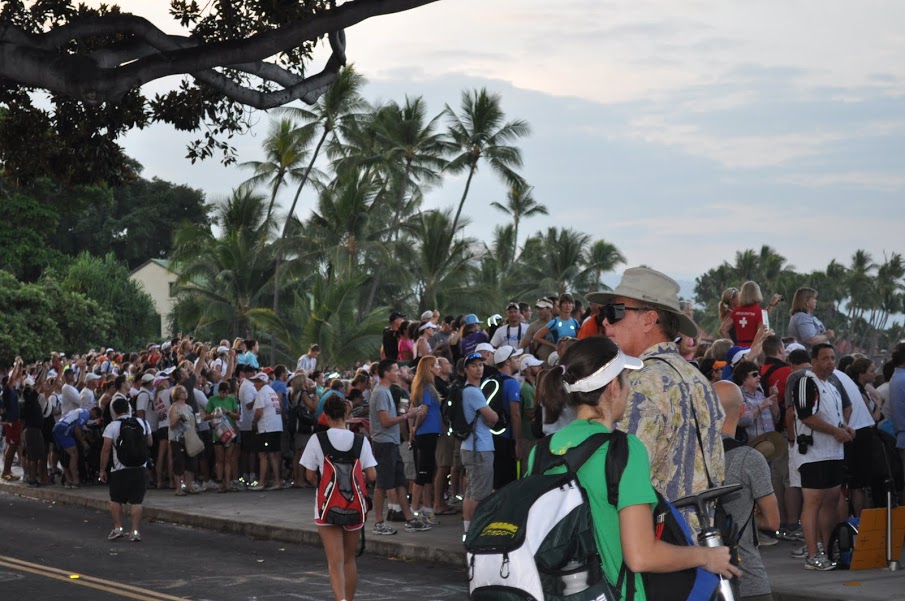 The crowds facing the swim. 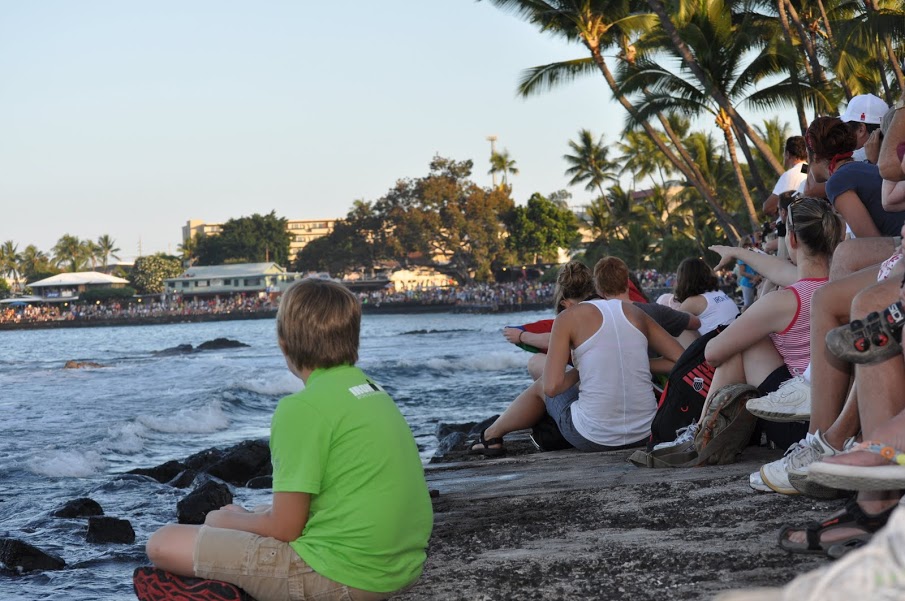 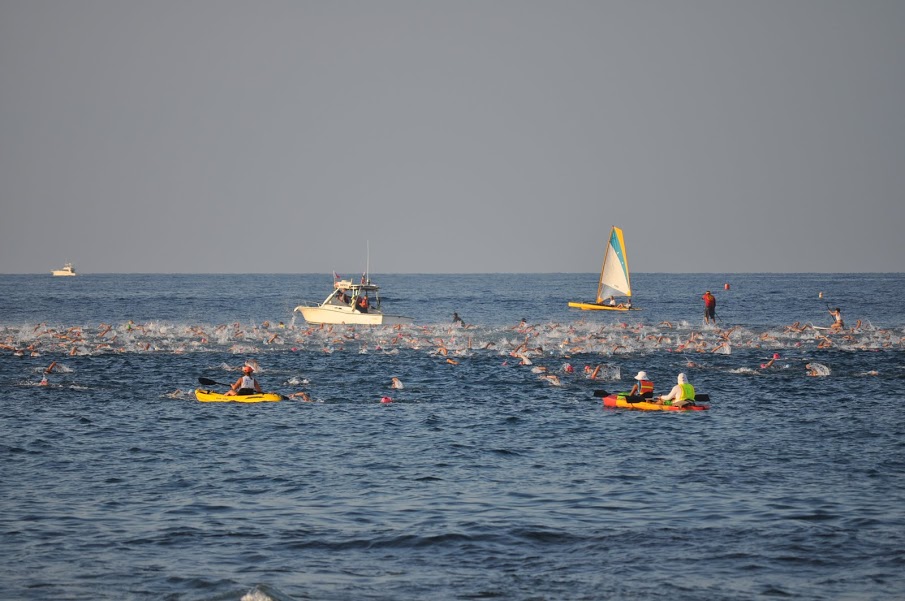 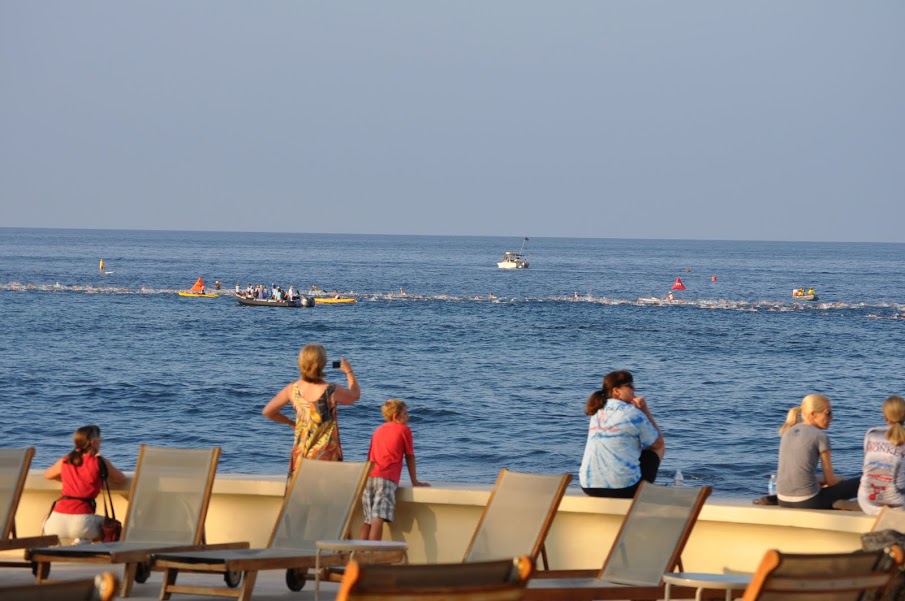 Once at the resort lobby, you’ll get an impressive view of the ocean and an even closer view of the swimmers. Don’t be shy about walking through the lobby either as there will be plenty of others walking along the ocean view to watch  the swim with you. 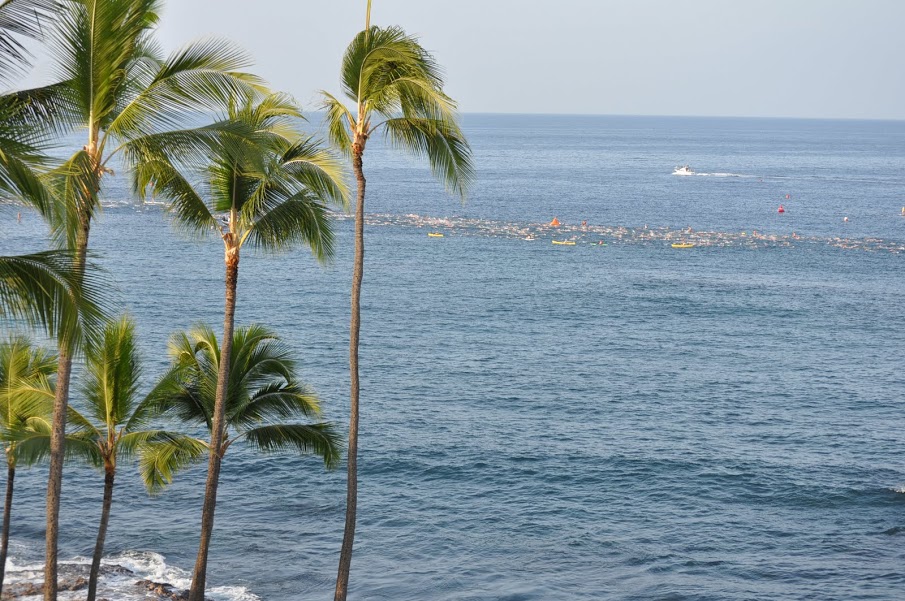 This aerial shot taken from our hotel balcony.

BIKE OUT: Did you remember what your athlete’s bike and run outfits will be? (The bikers will come within a matter of seconds and you don’t want to miss your camera time. It’s during this part of the race that you should set your camera to “continuos” shot mode and “sports mode”.)

By the time 40 minutes from the swim has elapsed and knowing approximately when my husband, Kevin would be done with his swim, I walked a block up from Alii drive to Kuakini Highway.  Ideally, it’s best to walk further down away from the crowd on the same street side that bikers are biking out from and preferably on a bit of an uphill so that you can better spot your athlete.  The athletes will be making another loop back within 20-30 min so you will see him or her twice from here. In 2010, I stood right across from the Shell gas station from the bike out to capture these shots. It was crowded, with less elbow room and time to see your athlete turn the bend to bike out.

2010 KonaIronman. Kevin Coady on the far left. Shell station across the street.

2011 Kona Ironman. This time I stood away from the crowds across from the Shell gas station on Kuakini Highway, with better elbow room to snap photos and more time to spot your athlete. 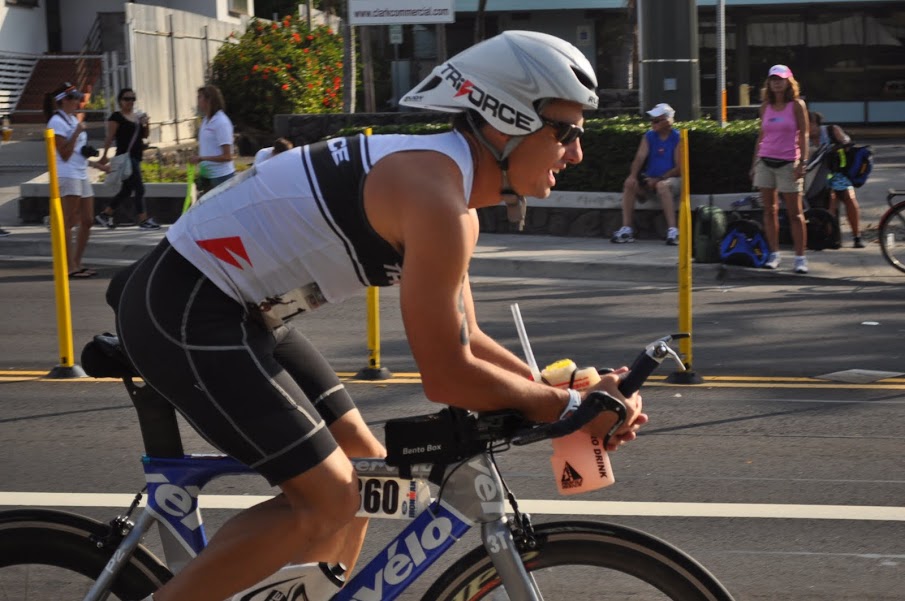 Away from the crowds with better visibility and better photos!

In 2011, I walked further down the street away from the crowd and had better visibility to take this photo with time to cheer and have Kevin hear me.

* Lava Java is a popular athlete and spectator eatery with great healthy food options. They also have free Wi-Fi. Last year on race day, there were two laptops on the counter for you to check your athlete’s progress on Ironmanlive.com (see below). Also, if you’re at all frustrated that Ironmanlive is lagging on your phone and/or laptop, you’re not alone. This is a known and frustrating issue shared among friends and family of Ironman athletes. Hopefully on your spectating day this won’t be an issue! 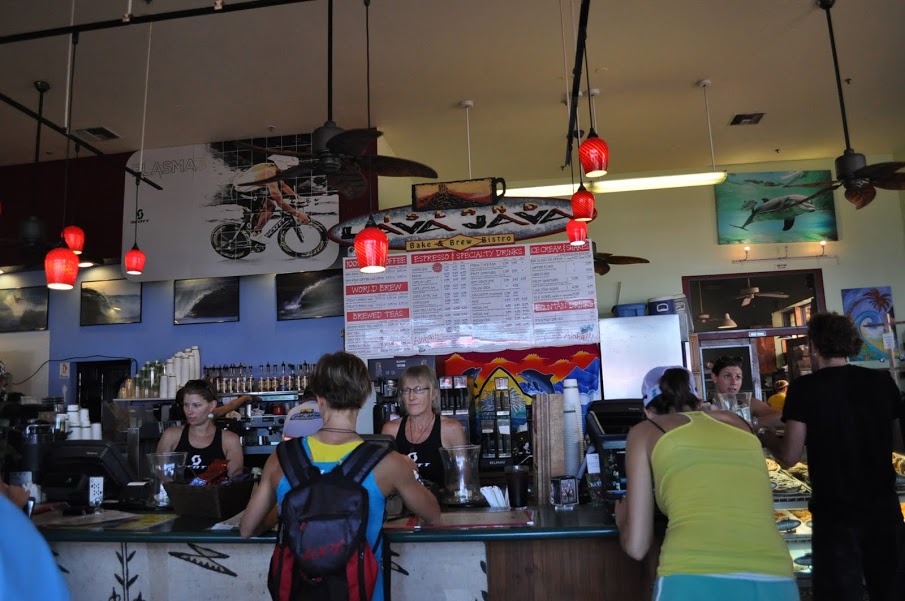 2011 @Lava Java. Laptops and free WiFi to help you pass time and check how your athletes doing on Ironmanlive.com.

* Looking for a great restaurant bar atmosphere? Lulu’s is a retro-surf themed restaurant right by Lava Java. They have a great second floor veranda decorated with dollar bills and a fun burger themed menu like the “Magnum P.I.” burger.  By sitting on the veranda, you’ll be able to take a break but not miss too much of the race action. 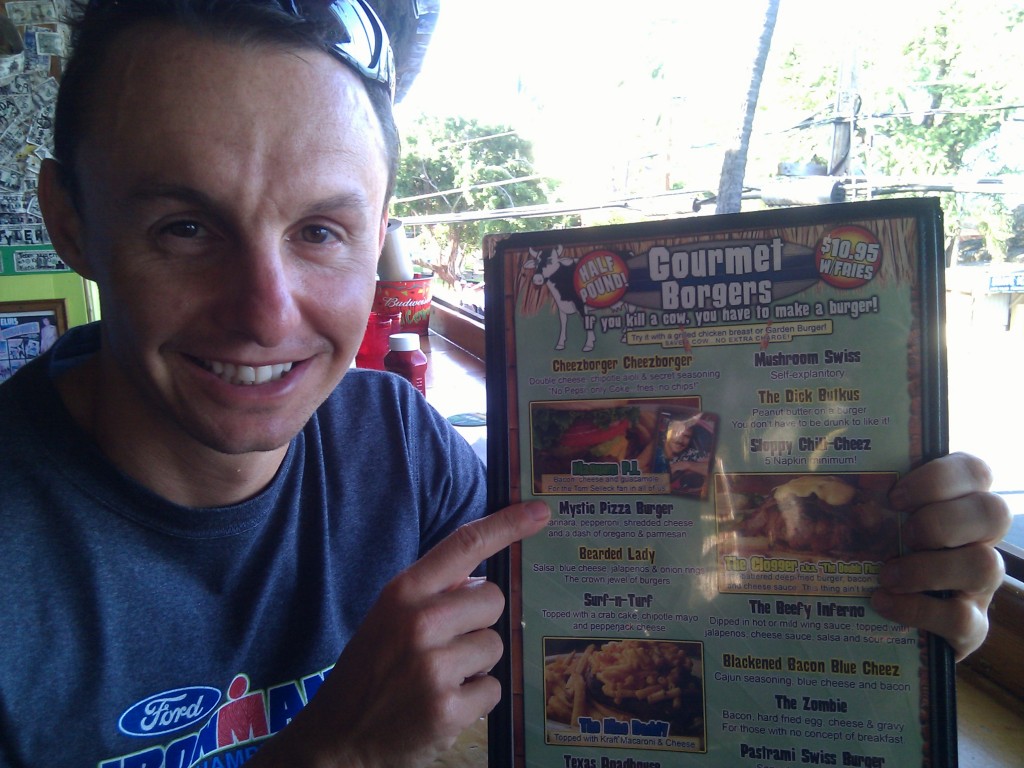 Kevin is a huge Magnum P.I. fan. We stopped here after the race. 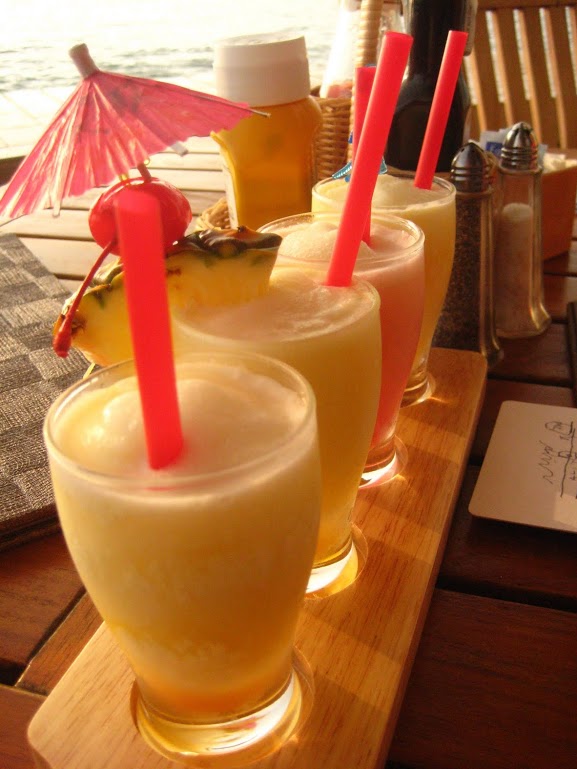 RUN: Since we stayed at the Royal Kona Resort, I stood outside of the hotel roadside where it’s partly shaded and convenient and only a few minutes walk to the ABC Store in case I wanted to grab a drink, snack or ice. You’ll see all the athletes run by twice here: once during the first mile and then again around the fifth mile. 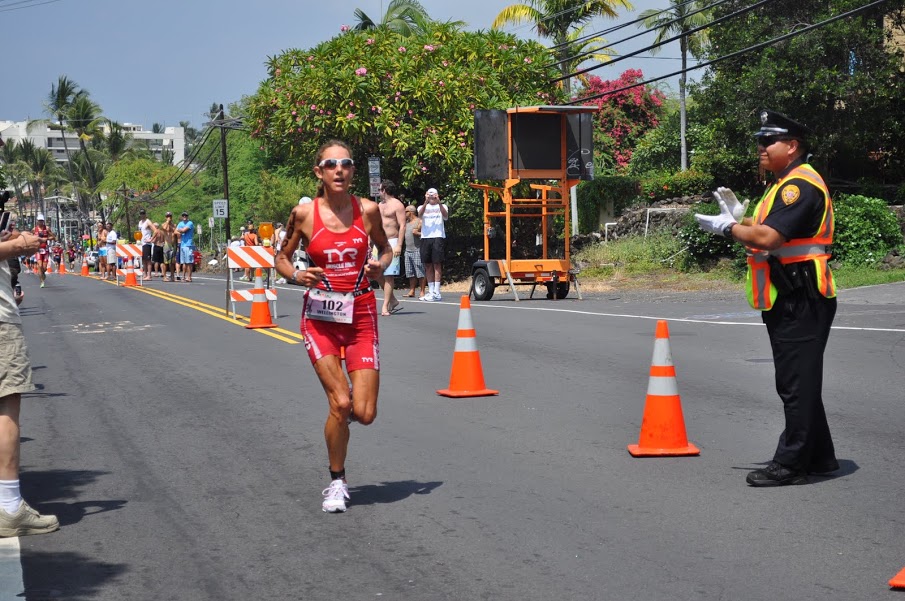 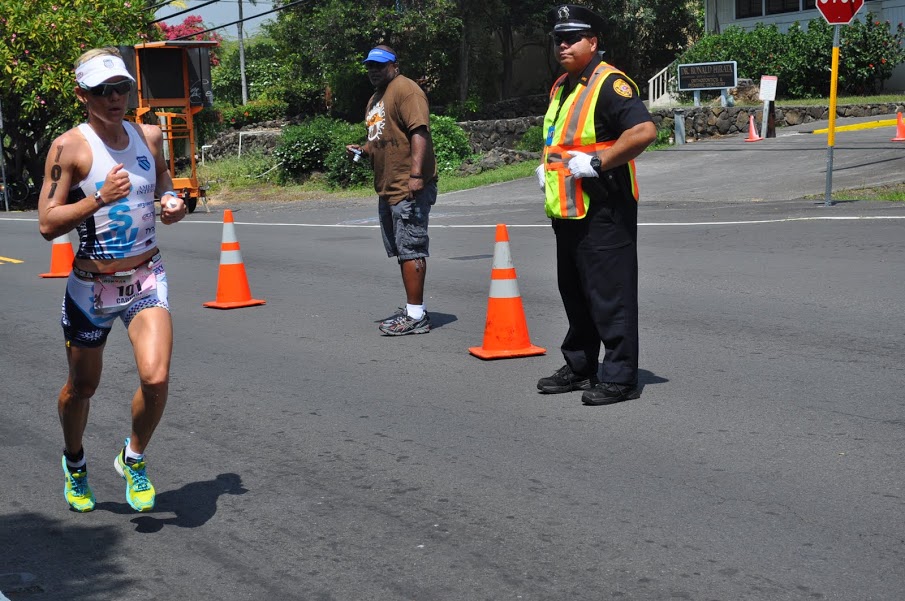 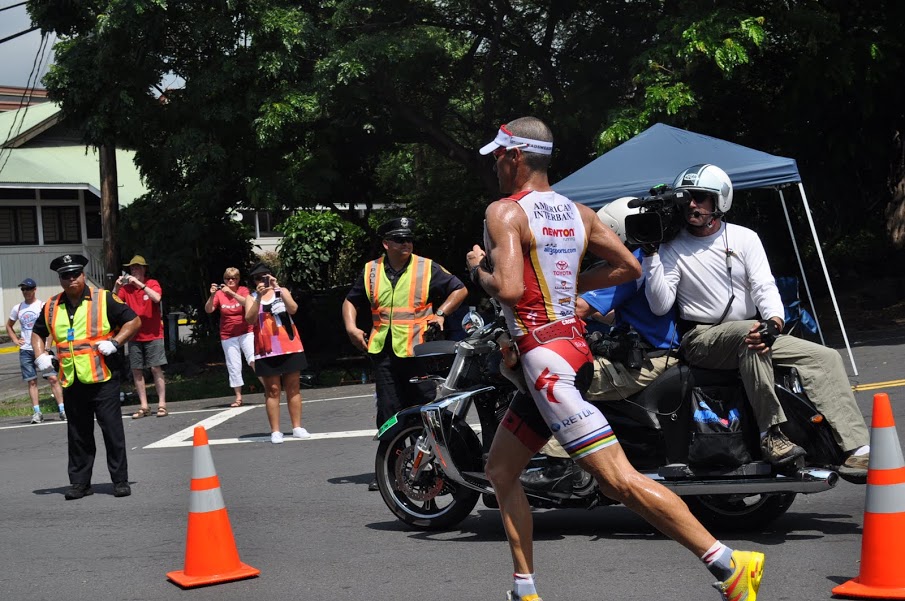 For the FINISH: Get to the finish an hour early before your athlete’s predicted finishing time to find a good spot to cheer and take photos. It’s an incredible moment to see everyone come in feeling exuberant! If you don’t mind fighting your way into the crowd, I would suggest that you stand in front or on the lower bleachers to get a great finishing shot. It will be hot standing around waiting. Bring water and sunscreen. 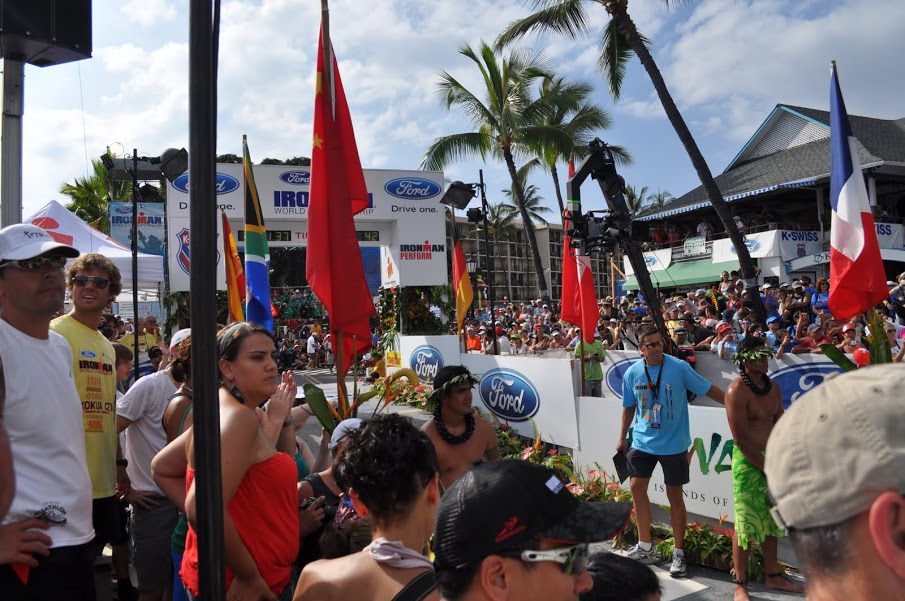 This was my favorite finishing shot of Kevin in 2010.  Good luck to your day of spectating and to your athlete! 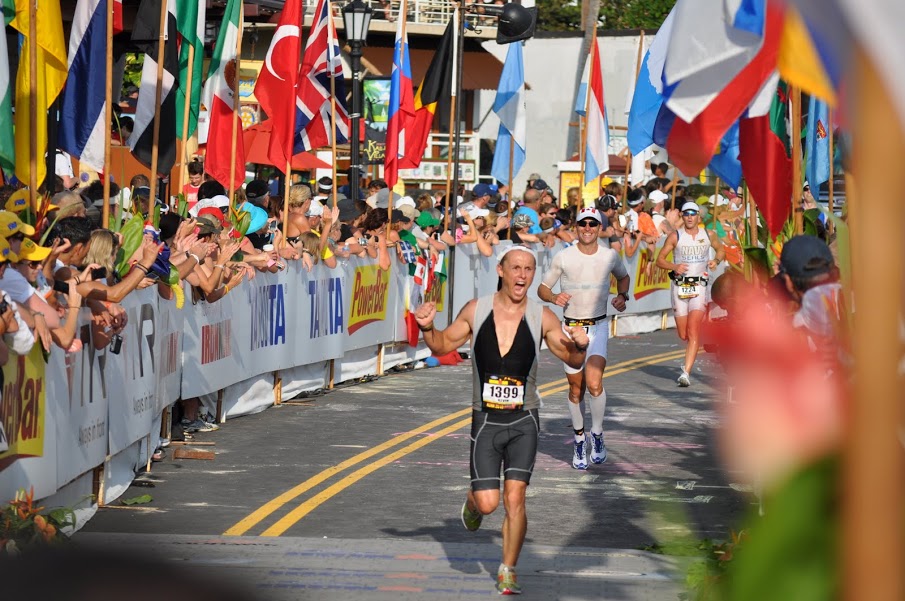