TriForcer Monzy Reports on His 2:51 Marathon in Monsoon Conditions at CIM

One-sentence summary: I sure am glad that marathons are draft-legal.

These were definitely the worst race conditions I’ve ever experienced: a torrential downpour and 25 mph headwinds. CIM is touted as one of the fastest marathon courses; it’s a one-way from Folsom to Sacramento with a net elevation loss of 350 ft, and only a few gentle rolling hills. But under such extreme weather conditions the course was anything but fast. A lot of runners sign up for this race with hopes of a PR or a Boston qualifying time, but this year it seemed like a feat just to cross the finish line.

I had run the Chicago Marathon 7 weeks ago, and I signed up for CIM at the last minute in the hopes of shaving a minute or two off of my Chicago time of 2:50:37. I was also secretly hoping to beat Larry — he’s faster than me at shorter distances, but I had a hunch I might match him in marathon. This part seemed like a long shot, since Larry had been ramping up to CIM for months, and had been exceeding my training volume, peaking at 80-mile weeks.

Once I saw the weather forecast I gave up on any time goals, and decided I’d just pace myself by HR and perceived effort. My strategy was simple: I’d find the biggest guys around and run behind them. I was determined to run a smart race, and avoid the front so I never had to fight the wind on my own. 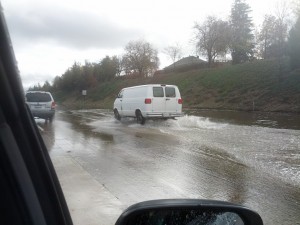 The starting area looked like some kind of hobo refugee camp, with 8000 people bundled in trash bags, huddled against walls and crouched under building overhangs to avoid being buffeted by the powerful gusts of wind and sheets of driving rain. The second half of this video gives a sense of the conditions. I stayed warm on the school bus until the last possible minute, trying not to look out the window so I could remain in denial of the nightmare outside. The poor guy sitting next to me on the bus had traveled from North Dakota to escape the cold midwestern winter, hoping to soak up some California sunshine, and had instead ended up in this rainstorm of unprecedented magnitude. 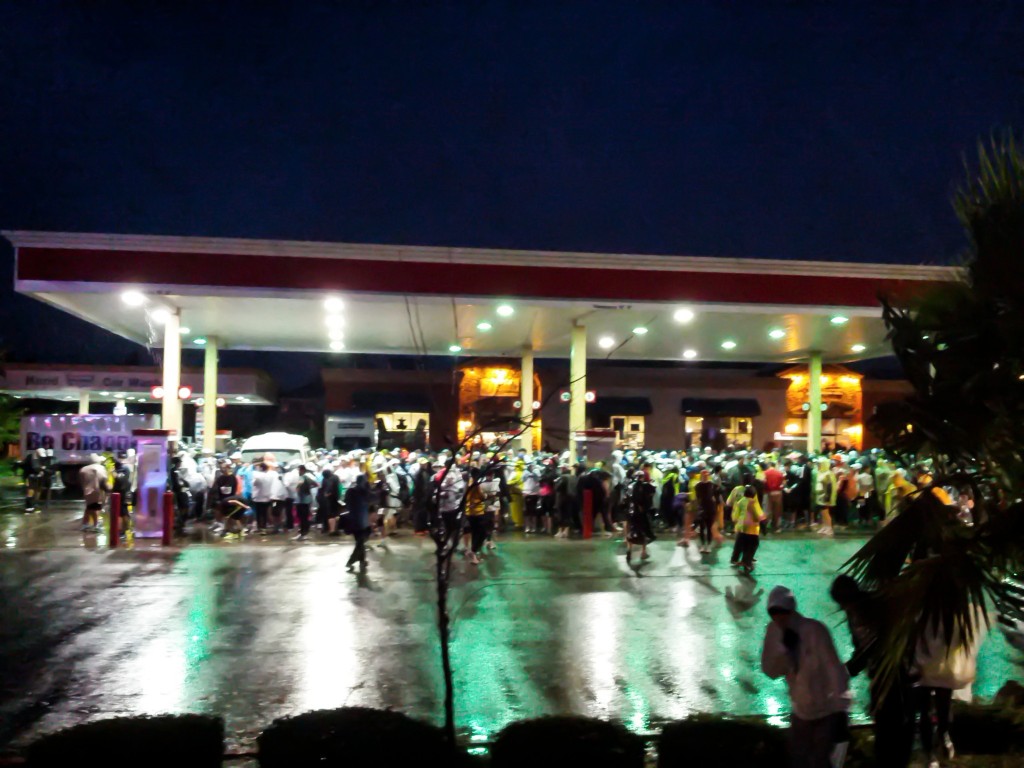 When I finally exited the bus, the weather was so comically terrible that all I could do was laugh it off and start running. After a few miles I was so utterly soaked to the bone that I couldn’t get any wetter, and it didn’t really matter how hard the rain came down, how many puddles I had to stomp through, or how many people kicked dirty water into my face.

We initially set out heading south, directly into the wind, but after less than a mile we turned west, and the sidewind made things dramatically easier. The next six miles were terrific as we continued heading west and mostly downhill. I fell in with a pack running at a 6:15 pace, which felt comfortable on the downhill. Mile 7 was where the trouble started: we turned south into a direct headwind and stopped going downhill, but the group mysteriously continued running at a 6:15 pace.

Now I was faced with a dilemma: the pack was running at a pace that was too fast for me to sustain, but if I dropped off, I’d have to fight the wind on my own. I looked back behind me, but there were no other runners (i.e. drafting opportunities) in sight.

My heartrate was climbing into the 160s, and I knew it shouldn’t remain there. I fell back, was suddenly battling the wind on my own, and watched my heartrate remain the 160s even at a 6:45 pace. I kept hoping for some nice big wind-blocking runner to pass me so I could glom on to him, but I ran for another terrible half mile without encountering anyone. So I imprudently “burned a match” (to use Coach Coady’s terminology), going above threshold to catch up to the pack again. It felt good to draft once more, but soon I began struggling to keep pace, and I fell back again a half-mile later.
I was now frustrated at my inability to stick to my very basic strategy; the course just wasn’t dense enough with runners, and I was stuck between packs. I spent another disheartening half-mile on my own, exposed to the wind gusts and struggling way too hard to hold a 6:45 pace. Then, all of a sudden, there was Larry, catching up to me from behind! Big, beautiful, tall, wind-shielding Larry! He greeted me as he passed by, and of course I immediately took up position directly behind him, which I decided would be a primo place to remain for as long as possible. We chatted a little bit, but Larry seemed reluctant to engage in conversation, probably because he was in front, struggling a lot harder than me. But he didn’t slow down to force me to lead, so there I stayed, sheltered from the wind, if not from the growing sense of resentment radiating backwards. 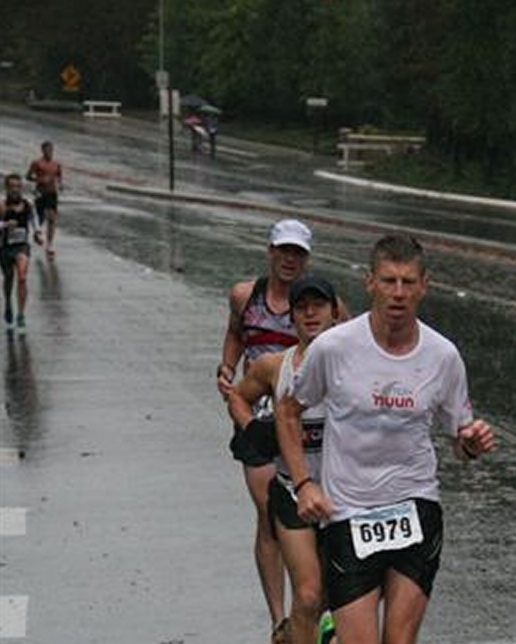 After tailing Larry for two miles, we were passed by a speedy female runner, and Larry decided to draft her. She was short and slim, a little sylph of a woman, so I doubt she offered Larry as much of an advantage as he was providing me, but I suppose it gave Larry some relief after fighting the wind himself for so long. Our odd little pack remained together for the next three miles, the woman in front, Larry next, and me in back. We made some small talk; I told a story about my quest to navigate a flooded Home Depot parking lot the previous night to locate a garbage bag, and I cracked jokes about how this was more of a duathlon; Larry wasn’t super receptive to my attempts at conversation, but the woman seemed friendly. Her name was Lindsay, and at the next hydration station we discovered that she was an elite when she got her own water bottle. Larry asked if she was attempting to qualify for the Olympic trials with a 2:46, and she said she wasn’t sure if she’d pull it off, since we were currently pacing a 2:47:30.

Jen was there to cheer me on at mile 11, and I told my running companions that I felt bad for making my 34-week-pregnant wife wake up before sunrise and trudge through a downpour to see me for all of ten seconds. Lindsay congratulated me on the baby and asked if we were expecting a boy or a girl. She told me that she had two children, which was impressive given that she had a perfectly toned body and was probably going to beat me in a marathon. Sure enough, she pulled away about a mile later, but I decided to stick with Larry. Larry tolerated me for another two miles, but when I started cracking jokes a little too cheerfully with a passing runner, he decided he had finally had enough. Larry declared he was done being in front and slowed down to force me to pass. Fortunately, we were no longer alone; I caught up to a nice tall specimen wearing a Nuun shirt, and decided to stare at his back for a while, with Larry tailing behind me. This was just fine with me, since now I had a big guy in front of me to block the headwind and a big guy behind me to clear out my wake… even better drafting action! 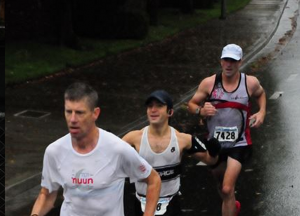 Nuun guy, whose name was Mason, maintained a steady 6:30 for the next six miles, and although we didn’t exchange conversation, he didn’t seem to mind that I was grazing his heels. By mile 23 he had slowed to a 6:40, but I no longer saw Larry behind me, and I didn’t want to give up the drafting opportunity, so I hung on for another mile. By mile 24, he had slowed to 6:45, so I decided to finally strike out on my own. Unfortunately I didn’t have much remaining drive by then; my quads were in increasingly severe pain, and my motivation began flagging when I realized I was unlikely to PR.

I was now at 29th St and L St, and I knew Jen was waiting to cheer me on at 14th and L. Each block was pretty agonizing but counting them down one by one was encouraging (28… 27… 26…) until I saw Jen’s colorful umbrella and smiling face. After that, I only had another half-mile of pain to the finish. Although the 2:50 mark had already ticked by, I managed a half-hearted sprint for the last 100 meters. 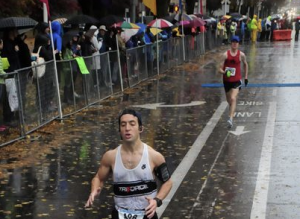 Monzy pushes to the finish, doing the TriForce singlet proud!

I finished in 2:51:03, just 17 seconds ahead of Larry, and 6 seconds ahead of fellow Googler Matt Kane, who must have had an off-day (he’s normally much faster than both of us, and was shooting for a 2:26). Matt got real wobbly after finishing, and a few people helped him stand up and walked him to the medical tent. But Larry checked with Matt later on and apparently he’s doing OK.

In nature’s final mocking twist, just 20 minutes after I finished, the rain slowed and then stopped, the wind died down, the clouds parted, and the sun emerged. Suddenly, it was a beautiful day. Couldn’t the race director have just delayed the start by three hours? At least the slower runners got to run their last few miles in the sunshine. And although I didn’t manage to break 2:50, I was only 26 seconds slower than my PR, which I’m very pleased with given the extreme circumstances of this dramatic and memorable race.

Monzy’s hydration efficiency has gone down 50% since Wildflower
I’m grateful to Coach Coady for providing me the discipline, planning, and advice on race-day execution that allowed me to race smarter instead of harder, adapting to changing conditions to run a strategic and efficient race… even if it meant being a lazy wheelsucking (heelsucking?) leech for about 25 out of 26.2 miles.