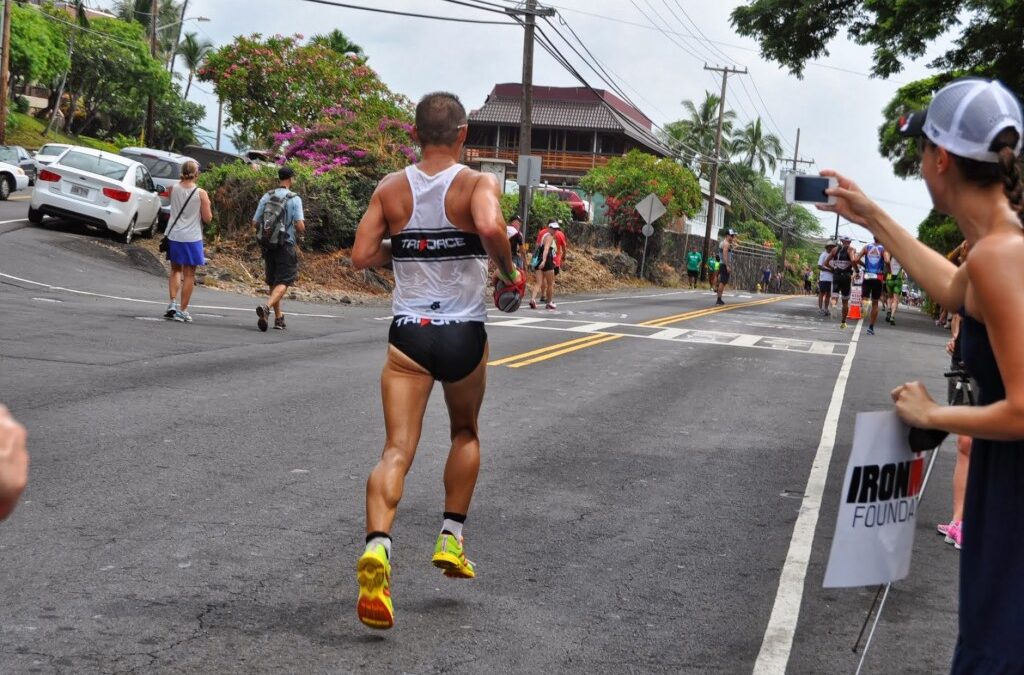 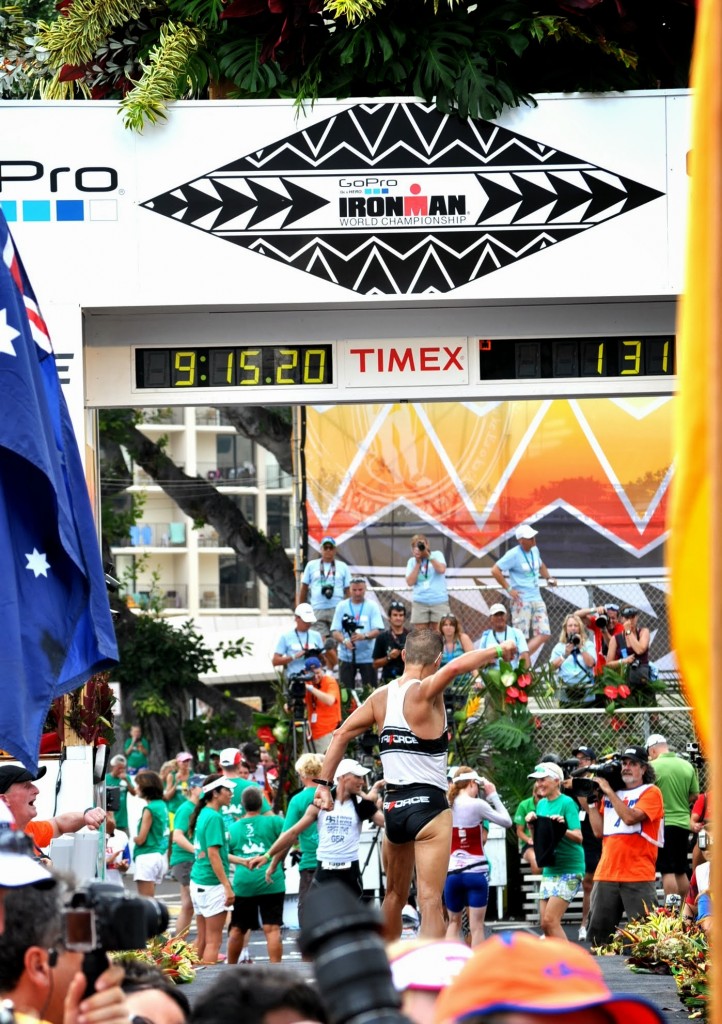 This was the first time I had the chance to prepare all year for Kona since I qualified when I went 8:56 at IMAZ.  Training went well-  was at lifetime best run & swim numbers and my bike equaled my best from last year.    I was 5 pounds lighter and significantly more aerodynamic as well.   I felt I had a real shot at a podium at Kona!

TriForcer Rob Gray and I lined up together to the right and behind the aggressive angry looking people in the first 3 rows or so.  The people behind us looked docile– it was a good spot.  We were planning to swim together if possible (we’re about the same speed). 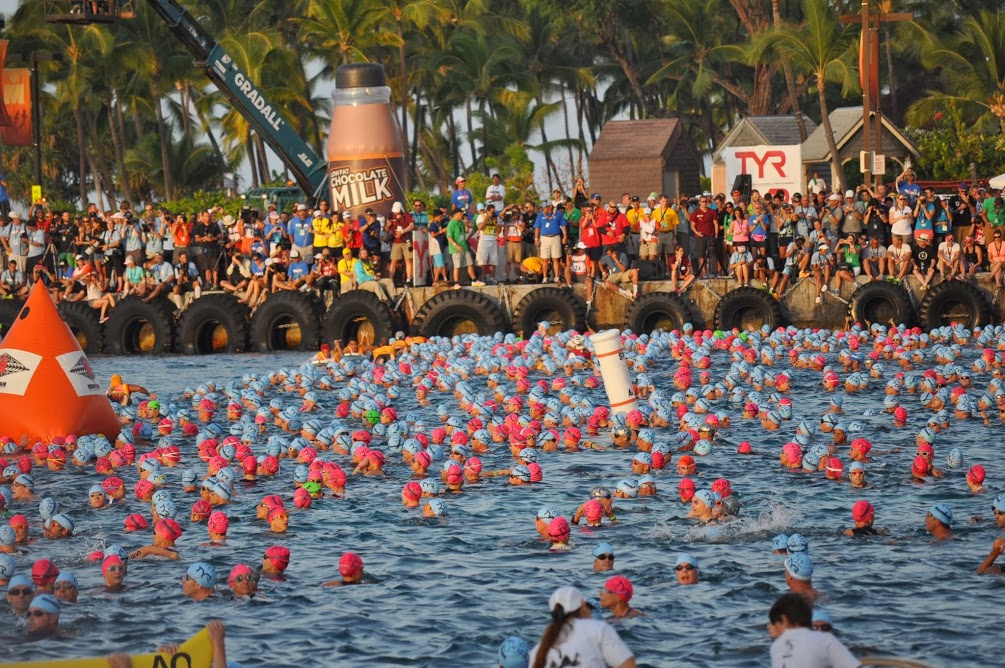 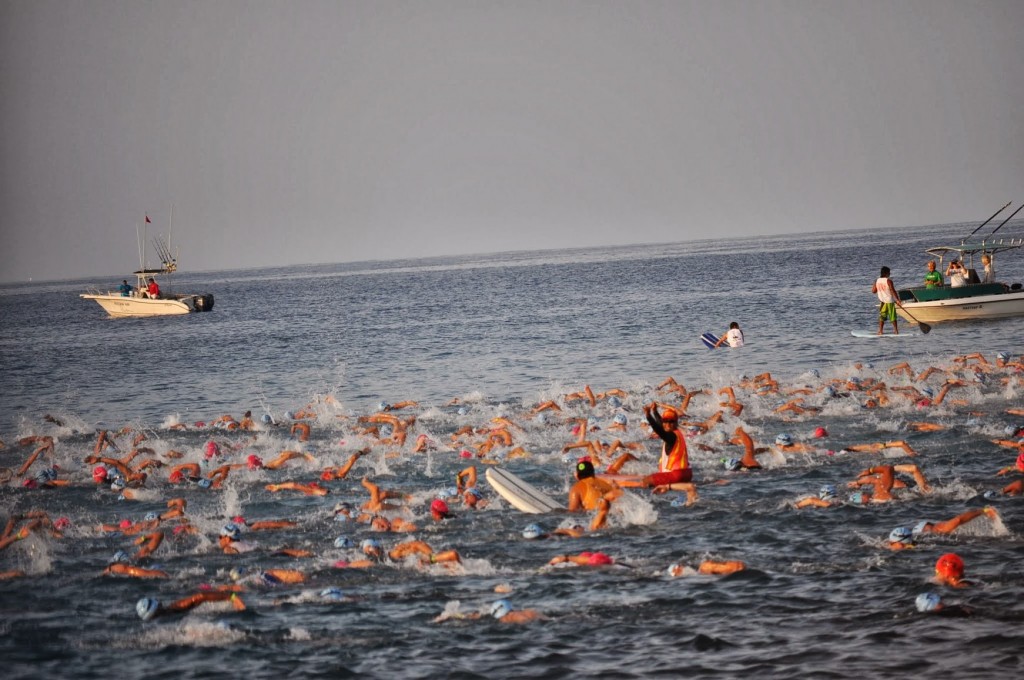 The cannon went off and it was reasonably rough but not too bad at all.  I was quickly getting sucked out into a good draft.  The water was pure white in the chaos and Rob and I lost each other when he had to run over a foolish person who lined up way too far in the front.  My right goggle was briefly yanked from my face and it filled with water.  I decided to swim with it like that until things calmed down and I could empty it without getting trampled!

Soon I was drafting at what felt like a solid tempo effort.  My group was right near every buoy so I  felt we were navigating well.  I drafted about 90% of the race and my effort was solid.  I was expecting to be coming in close to an hour based how hard I was swimming + drafting.  I was unpleasantly surprised to see 1:05 on the clock.   Oh well.

I managed to escape my TYR Torque (the zipper catches every time I try to get out of it), and I pulled on the upper half of my Pearl Izumi tri suit.  When I tried to zip it up I found the zipper was broken!  I wasted a minute trying to fix it then wrapped my HR strap over the top of it and cinched it together so I wouldn’t be catching wind like a parachute.  By the time I got out of T2 the clock read 1:10.

One consequence of my slow swim was the bike was CROWDED to start and I knew the crowds would be thick for awhile since even at a one hour swim, it’s reasonably crowded at Kona.  I was doing my best to  use positive self talk (“my completely unzipped tri suit will keep me cool” or “every person I pass will block the wind for me for a few seconds as I go by”).  If you are committed to riding legally, having crowds around you can cost a good bit of energy, and I wasn’t looking forward to all the accelerations I was going to have to put in. 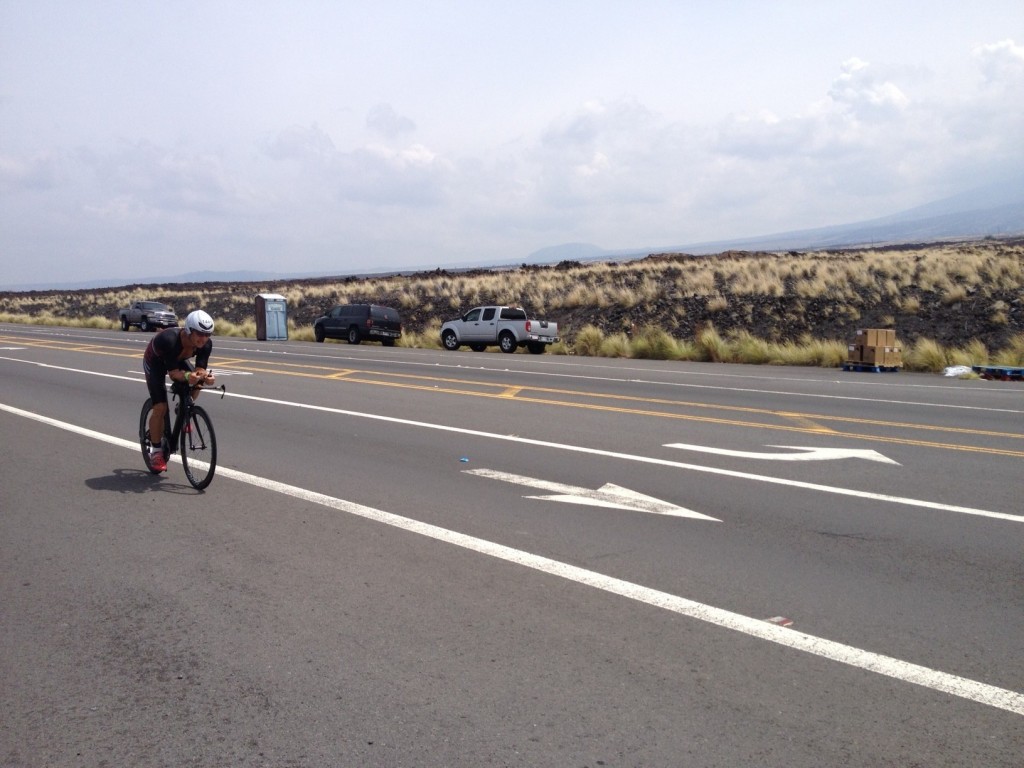 I was slowly moving up early on in the race (people bike like crazy and are hard to pass).  My mantra on the bike was “save energy” and keep it smooth.  For the most part I kept my power in check with the occasional spike to make sure I was passing legally.  Luckily most people are going slowly enough that it’s not a huge effort to pass them (unless they happen to be passing someone else!)

This was a crazy tailwind year.  It seemed like we reached the bottom of the climb to Hawi in about 45 minutes!   For the “climb” up to Hawi it felt like we were riding at around 25 mph with a strong tailwind for most of the  time.  It was somewhere in the middle of the climb that a “mega (illegal) pack” of about 30 people caught up to me.  After dropping back about 4 times, I tried to “break away” but a hero of the peloton accelerated to stay on my wheel.  I realized it was hopeless and just let the entire pack of 30+  cheaters (complete with top AG females) ride right through as a I dropped back.   I’m determined to work on my swim so I never have to deal with a bunch like that again!

I took about a minute of “rest” letting them get away (they hit the turnaround about a minute ahead of me– it would be interesting to see if there is some way to see all the  racers that crossed that timing mat within 10 seconds of each other).  I rode steady to the turnaround then looked forward to descending.

The decent from Hawi is usually scary and you’re holding onto your bike for dear life not to get blown off the road.  This year it was smooth & easy!  I started passing people on this descent and didn’t stop passing people all the way back to town.  You could see that many  people were simply out of juice from riding too hard on the way out.

nutrition: My IM nutrition plan is usually simple.  A bottle of perform about every aid station (10 miles) + about 1/6 cliff bar / 10 min.  But at Kona the aid stations are 7 miles apart.  The  difference was enough to make me lose count and I started to drink aggressively at the end because I was afraid I was getting low on calories.  I knew I had to drink 2 bottles for every 3 aid stations but I didn’t anticipate how easily could lose count.  Lesson for next time!  As a result, my stomach was a little on edge.

(I rode 231 NP at IMAZ for a 4:46 bike split).  This race was starting to feel very much like IMAZ (disappointing swim, surprisingly fast bike)

My legs have never felt so great after getting off the bike.  I changed into speedo and run singlet to help me keep cool.

Miles 1-10 on Alii Drive were perfect.  I felt like I was jogging at an average of below 3  hour marathon pace.  Pace, effort and heart rate were conservative as planned.  I’d done some serious heat prep, and the day was relatively cool  (for Kona), although the dew point was high (some experts think the dew point is the key number for seeing how heat affects your running).  I was ahead of schedule on my drinking (2 bottles of  coke by mile 8) and my stomach was only a little unhappy.

I walked a couple chunks of the steep uphill at Palani as planned then made a left onto the queen K (the mentally nasty part of the course).  Somewhere around the half marathon mark or maybe a bit past, my quads started throbbing with pain and my stomach felt terrible.  I had to make a road side pit stop for my stomach (a quick process if you’re wearing a speedo).

But my quads were continuing to feel worse and worse.   I’ve had mysterious quad issues since before Kona 2011 and I thought I had them under control this season.  More or less the middle part of the marathon (maybe miles 14-19) were a dark point for me.  Usually I motivate myself by looking at my timex watch with my overall race time (aiming for a sub 9:10, e.g.) but someone hit “stop” 42 seconds into the swim!  I wish I would have thought of aiming for a time goal at this point, but I was just in damage control mode.  I wish I could go back in time and give myself a kick in the ass during this part of the race.  Once I knew I was done “racing” for a top spot, I was mentally in survival mode.  I definitely wasted some time in here (if I was 3  minutes faster I’d have finished in 14th)

Somewhere around mile 22 I started smiling.  I hurt like hell but in my mind I knew I was getting close to the finish.  “The last mile is downhill then through town.  The mile before that is the final uphill.  So I just have 2 miles left until the last uphill!”  I was pushing hard and smelling the finish.  With 2 miles left I tossed my bottle and went for it.  It hurt badly but I skipped the last 2 aid stations and ran hard all the way to the finish.

I was super pumped up to finish!  I finished in 21st and missed my podium dream by 15 minutes, but I was proud of myself for pushing so deeply into the pain. 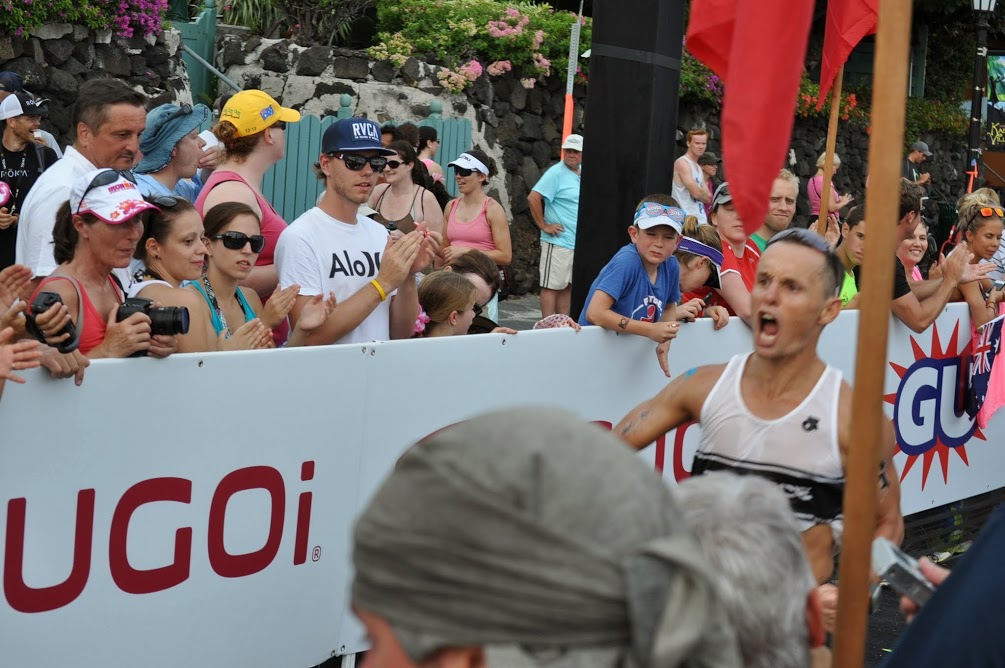 I’m disappointed that I missed a podium spot by 15 minutes, but I can see that I’m VERY close to a podium spot if I can fix my quads.  (I know I can easily go sub 3, which would be an 11 minute improvement right there).

This season I’ll put a huge off season focus on strength training (including heavy eccentric loads) for the quads and supporting muscles (as well as focusing on recruiting my glutes more).  If that doesn’t work, then I’m going to see some doctors to see if it’s some sort of medical issue.

I’m also going to experiment with swimming almost every day for awhile and I’m planning some promising tweaks to my bike / run training which should yield me a few minutes.