How to Race a Half Ironman. 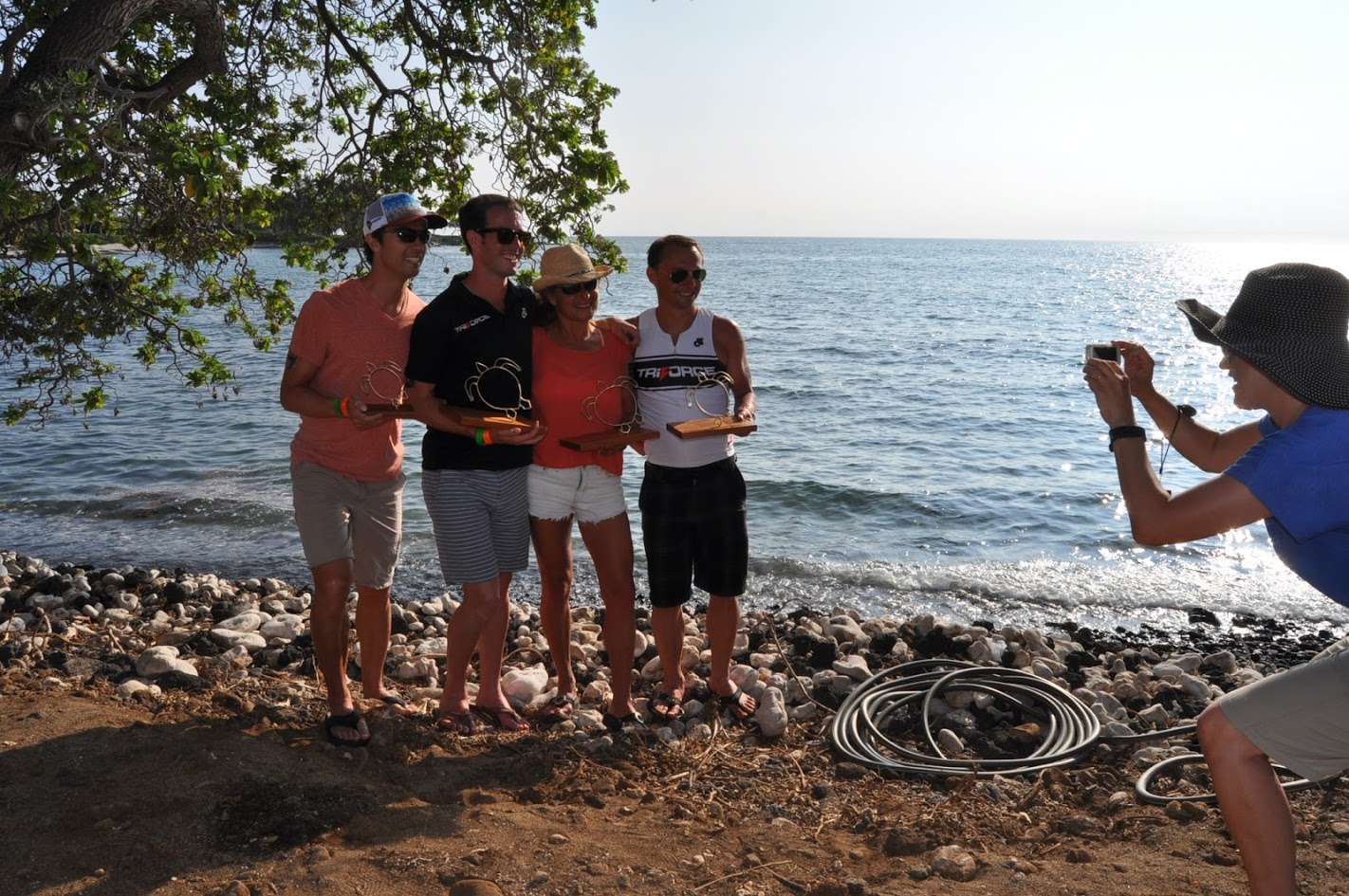 Above: 4 TriForcers (Li Moore, John “Snickers” Nickers, Mimi “Usually” Winsberg, and coach Coady) podium at Honu 70.3. The best athletes not only train hard, they also have their nutrition, hydration and pacing dialed.

For whatever reason, I’ve failed to impress on many of our new team members how important it is to dial in their pacing and nutrition. Some TriForcers love to train, but show almost no interest in developing their race pacing or nutrition strategies. This is a recipe for failure! You can train 30 hours per week, but if you pace poorly and don’t take in enough calories (or you take in a mix of products that upsets your stomach), then you’re doomed to have a poor race. If you are a busy athlete who has been making sacrifices to squeeze in all your workouts, but you won’t take the time and focus to figure out your pacing and nutrition, it’s a sad, sad situation when your race goes off the rails. And one that was probabl preventable.

It all starts in training. You should do your time trials to set your threshold and zones. You should pay close attention to the race pace reps in training to see if they feel sustainable and to dial in what that effort feels like. You should test your nutrition products and your hydration and your bike setup under stress so you know it works. This is all built into people’s plans, but so often it gets ignored. (e.g., the key 3 x 30 min at Half Ironman effort just turns into a regular weekend endurance ride).

Here are some essentials for having a strong Half Ironman / Ironman 70.3 race. This doesn’t include everything (I’ll try to keep updating and improving this), but these are the essentials. Get all of these right and your chance of having a strong race goes up massively

DO NOT “DIET!”  NO F’ING SALAD!!    When I read that someone’s pre race meal is a salad with chicken I know they are likely going to have a lousy race.     I’d rather you eat 200% too much the day before the race instead of 10% too little.  NEVER GO HUNGRY! EAT PLENTY!!! When I started in the sport I was always worried about my weight and I had some races where I simply didn’t eat enough the day before the race (I wanted to wait until I had my regular special “healthy food”) and I’d have bad races.

Those experiences reinforce something I’ve learned one thing over and over– EAT PLENTY THE DAY BEFORE THE RACE. Don’t worry about being healthy if you don’t have access to healthy food– if you are hungry, then eat ASAP. I’ve won my age group at 2 Ironman races eating a BIG ASS MCDONALDS MEAL the night before.  I’m convinced that a big, salty, high calorie meal the night before will only help performance. Just avoid foods that tend to upset your stomach and don’t eat so much that you feel “clogged up” and not hungry the next day.

DON’T GET DEHYDRATED THE DAY BEFORE (BUT DO NOT OVER HYDRATE).   Drink enough that you aren’t dehydrated.   But don’t try to “load up” on water for race day.  You’ll just wash all the electrolytes out of your system.   If you are peeing normally you are drinking enough. We aren’t camels– if we drink 5 gallons of water the day before the race our body can’t “save it” for race day– you’ll just end up peeing it out which will be a negative thing.  I think most people who get hyponatremia (a dangerous conditions caused by over drinking) start their problems the day before the race.

PRE RACE WORKOUTS: I used to give people a pre race swim, bike, run to do the day before the race, but I found it just adds to stress and can contribute to people running around going too long without eating (see above).   Now we usually just do a short spin. We just want to loosen up, break a sweat and get the muscles firing. That’s IT! Quit when you feel good. One other goal is to make sure your bike is working well (brakes not rubbing, gears shifting well, power meter working, etc)

EAT A DECENT NUMBER OF CALORIES AT BREAKFAST.   If you don’t take in a breakfast on race day, you are screwed.  If you struggle with real food in the AM, make a smoothie or have some Ensure.   I’d like to see at least 500 calories (unless you are tiny) with at least a little fat and protein for sustenance.

Do you have a regular breakfast you eat before hard training days that works in training? THEN EAT THAT!! Don’t eat something weird or different on race day. If you crush hard workouts after bacon, eggs and toast, then why confuse and upset your body with a bottle of Ensure?

Hydrate: again, don’t go crazy– when you are peeing normally that’s enough.  If you will be in transition a long time, carry a bottle to sip on (again, just a bit of sipping should be fine to keep you topped up)

SMALL SNACK BEFORE THE START.  I take in a couple of hi5 gels maybe 10 min before the swim.  That’s 200 cals to start fueling. I find they don’t bother my stomach. Try this in training.

SWIM ROLLING START POSITION:   Unfortunately you need to inflate your swim time by maybe 2-3 minutes because everyone else does the same.  If you will swim a 32, line up at the 30 sign, etc. Decide– what’s more annoying to you– starting too far back and having to pass slow swimmers, or starting too far forward and getting “swum over.”  If you fear aggressive contact, then starting too far back is probably better.

LOOK FORWARD A BIT AS YOU SWIM:  don’t look straight down at the bottom of the lake!   Look forward a bit so you are aware of the people around you.  This prevents unexpected collisions and allows you to draft. Bend your neck and look forward with your eyes, while keeping your body level / neutral.

SWIM PACING AT THE START.  Start off RELAXED.  Since it’s a rolling start there is no need to go fast at the start to establish position (like there can be in a mass start).  Even if you try to go easy you are probably going much too fast (adrenaline!). Just relax and let the crowd pull you out.

SWIM PACING.   Watch your breathing– if you can’t maintain your regular training breathing pattern (i.e. you usually breathe every 3rd but now you have to breathe every 2nd) then you are going too hard– back off.  It’s shouldn’t feel “hard” — you should be below your limit. 3 seconds / 100 in a half Ironman adds up to only 1 minute lost but it feels MUCH easier vs. being at your limit. Effort should be “medium”, not “hard” for most athletes.

*** COAST THE DOWNHILLS!!!  (and keep coasting until you slow down).   If you are someone who bikes slower then 2:45, coast every time you are faster than 25 mph.   Watch your speed and don’t stop coasting until you see 24 mph! (everyone else will be pedaling around you but follow the plan!).  You will lose a TINY amount of time sometimes, but this is the only time in the race where you can get complete rest and go basically the same speed as if you were working hard.  It will pay off at the end of the bike and during the run. An athlete who is as strong as an ox who is aiming for an age group win might be much less aggressive with the coasting, but for most people it’s a no brainer.

PUT YOUR BIKE COMPUTER WHERE YOU CAN SEE IT.    If it’s on your wrist or even on your stem you will only be able to glance at it occasionally.   You want it either on top or on front of your BTA (between the aerobars) bottle or you want to use an aerobar computer mount.

HOW TO PACE THE BIKE.

If you are pacing by heart rate– make sure you can see your heart rate and speed on your computer.    Keep your heart rate below the top of the ranges we set for flats, hills, steep hills, etc. When speed is high and you have momentum- KEEP COASTING UNTIL SPEED COMES BACK DOWN.

With power– look at 3 second power and speed (you might also look at speed and “lap power” or “lap normalized power”).  Keep 3 second power below the caps we set for gradual hills, flats, steep hills, etc. Keep an eye on heart rate as well to make sure it’s not above expected ranges.

Advanced: You might also hit lap every time you hit a new segment (e.g. just starting a climb) so you can see whether your lap power is too high.  Finally, you might also glance at normalized power from time to time– if it’s above 85% of your threshold power you are going too hard. Most people should be closer to 80%.   (figure out what those #s are before the race)

Simple coach approved plan: put 7 or 8 hi 5 gels in a bottle on your down tube.   Take a solid drink out of the bottle shortly after starting the ride, then take a drink every 10 miles or so.   For me, each drink is about 150 cals, so that would mean I’d finish 750 cals after 5 total “pulls” on the bottle.   FIGURE OUT HOW MANY DRINKS IT WOULD BE FOR YOU.  You could also set your watch to beep.  If your expected bike time is 3 hours, then you’d want to drink shortly after getting on the bike (as soon as your HR settles), followed by a drink every 40 min or so (you want some cushion between your last drink and the run).

YOUR PLANS: are usually a big mess!  A mix of bars, gels, sports drink, blocks. And they are very very prone to failure.  Even if you pull it off in training, racing is much more intense than training. What works in training doesn’t work in racing always.  Please follow my coach approved plan unless you have a rock solid track record of success with your own plan.  I repeat– your own plan is probably LOUSY, overly complicated, too many products, not enough carb calories, and prone to failure.

BIKE HYDRATION: a simple plan is to use a BTA (previously defined) bottle like the xlab torpedo.  Start with it full of water then finish it by aid station 1. Refill it and finish by next aid station.  Repeat… That’s 4 bottles which is plenty for almost any 70.3 race (if it’s cold you can do with less).

Pacing: stay at or slower than your planned pace for the first 5-6 miles.  If you feel good after that, push whatever pace you think you can sustain!

Nutrition / hydration: I carry a bike bottle in my hand.  Goal is to fill it up with coke (you could use gatorade if you prefer but coke has a GOOD track record with TF) and ice at aid station 1 and finish it by the end of loop 1.  Repeat for loop 2. If you were strong with your bike nutrition and hydration you can probably get away with just doing 1 bottle for the whole run, but if it’s going down well (no stomach issues) you might as well keep that rocket fuel coming in!   Plus, if you are planning to do an Ironman in the future, it’s great practice (you MUST keep fueling on the run in Ironman)

Remember, training is only HALF of the equation to having a successful Ironman or Ironman 70.3 race. If you want to crush your race you’ll also need to dial in your pacing, nutrition and hydration