I was lucky enough to be spectating at Kona this year to watch Guillaume kill it in his Kona debut.  His race report below is republished from Guillaume DeZwirek’s blog. Follow him on Twitter @guidezwirek.

The alarm went off at 3:45 but as with all race mornings I find it rather easy to jolt out of bed and begin my race day routine. I had the benefit of coach Kevin Coady staying with my on Ali’i for a couple weeks, and he was a great surveyor (and frequent commentator) of my habits. My typical IM breakfast would be a handful of almonds, two packets of Quaker apple & cinnamon oatmeal, 5 scrambled egg whites and a protein shake. I’m not one to look at labels (in fact my first real stringent diet has been this taper), but under coaches purview we cut the breakie back to two packets of oatmeal and a protein shake which totaled 540 calories, 57g carbs, 66g protein, 6g fiber, 4g fat. The fiber has never caused problems for me on race day.

After a trip to the toilet and a bottle of water and electrolyte drink (I begin heavy fueling ~36 hours prior to a race and am very careful to up sodium intake during this period to keep  everything balanced) my driver and #2 supporter, Papa Pedro, picked me up for the four mile drive to town and race start.

This is my third Ironman event and by far the most produced. Body marking is an elaborate process and I was pleased to run into Andy Potts, a class-act pro and my favorite racer on the circuit, who wished my good luck in turn. After getting your number stamped you’re corralled to medical for a mandatory weigh-in and finally into transition where I filled my bottles, inflated my tires, and made a requisite second stop to the potty. While in line for the loo both pro-waves managed to go off and I was a little frazzled by not having had the chance to double-check my run and bike bags from the night before to make sure everything was in order. I hoped for the best and jumped into the water with 15 min to cannon. 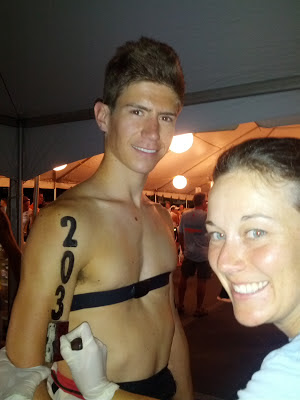 Swimming is my strongest of the three disciplines and I was not so secretly hoping for a 58 split, with an ambitious (but realistic) 56min goal despite waning tendonitis in my left elbow. I lined up very aggressively on the far right in the second row. When the cannon failed to fire at 7am flat this proved beneficial as I was in earshot of Mike Reilley and heard him scream “go, go, go!” Not surprisingly, the first 500m were chaotic. I managed to stick with the lead pack but soon found myself boxed in by two swimmers, both in egregious violation of my personal space and forcing me to draw back. The boxing-in continued to the turn-around with no exit in sight. I had the feeling I would post a terrible split and resisted the urge to check my garmin at the turn. I exited in 1:01:26, mortified and a little worried about the day to come. 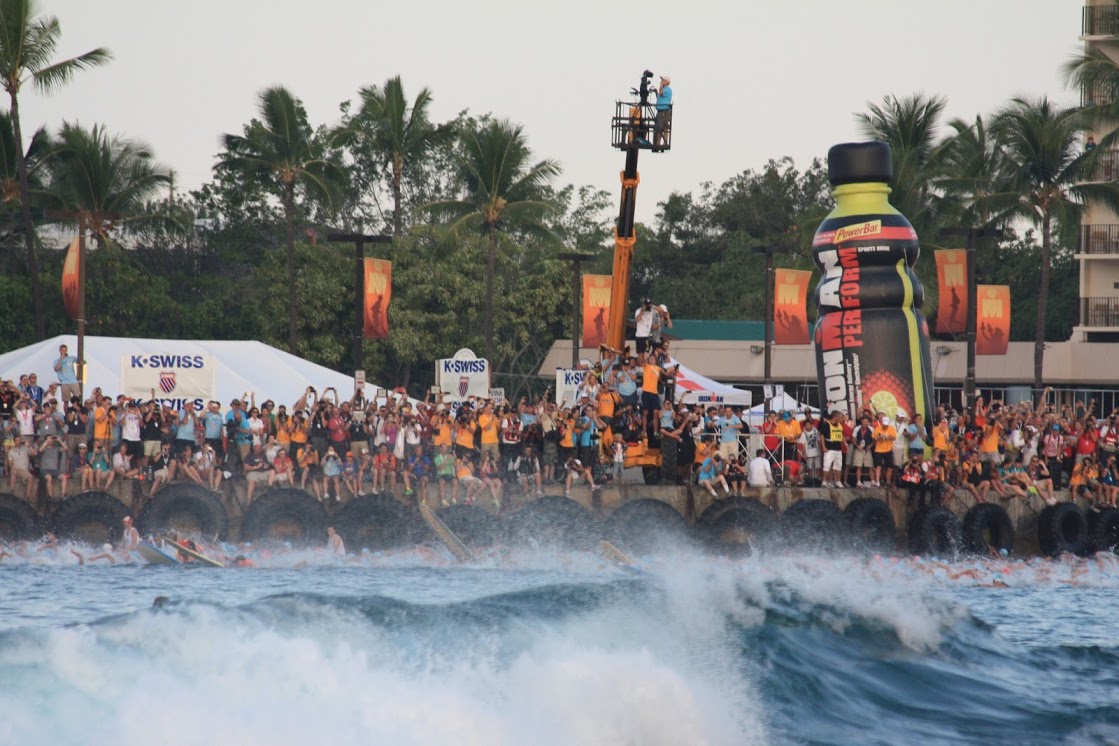 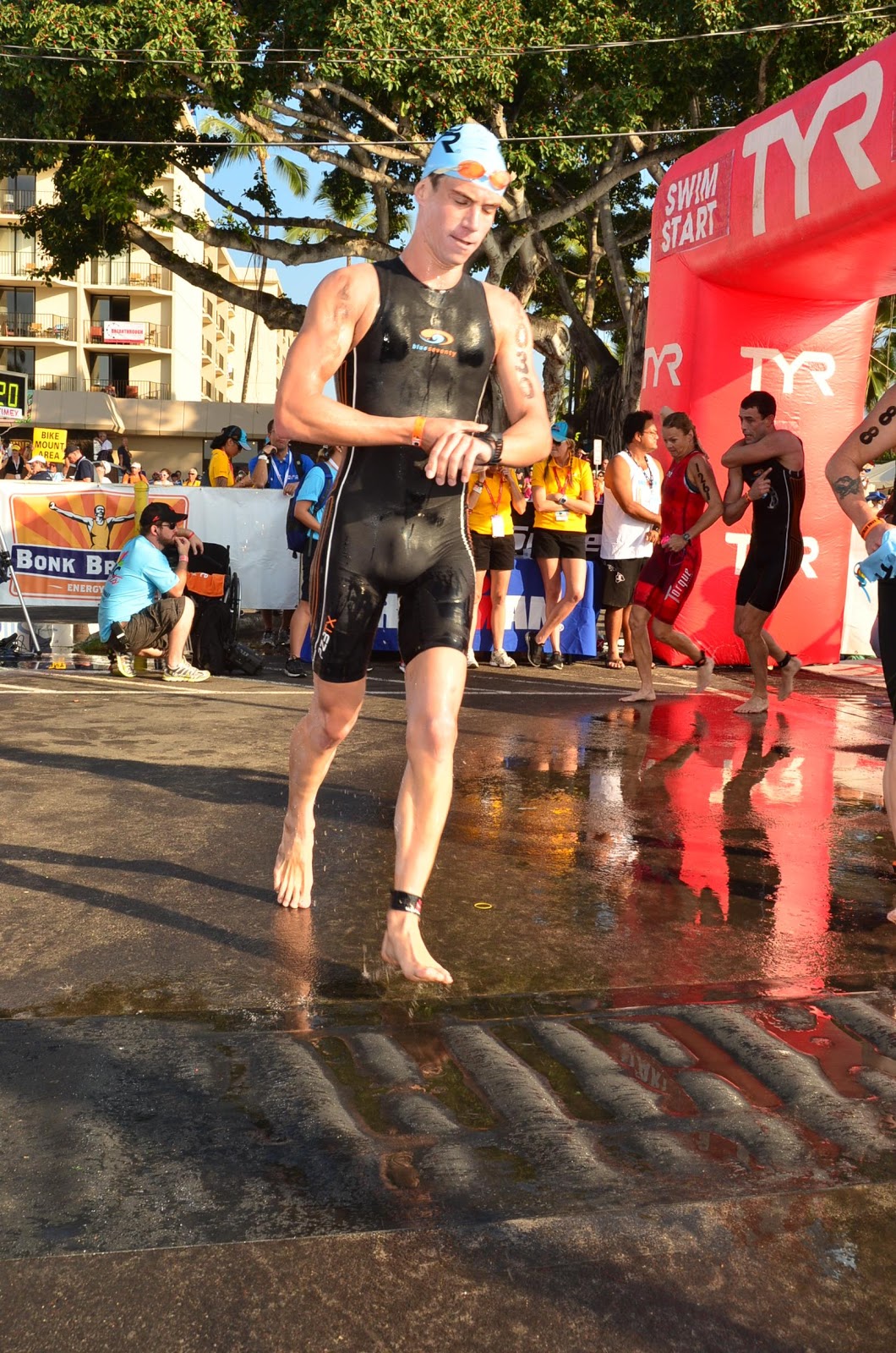 Heading into the bike, Kevin hadwarned me of the electric atmosphere and people’s tendencies to push way too hard up Kuakini and into the Queen K. Our plan was to cap my power at my target for the leg (210w) and give my heart rate a chance to settle – nutrition was to be 400 calories/hour as a combination of perform and cliff bars. I must have had 70+ people pass from transition to the base of Hawi, and if it weren’t for the forewarning I’m sure I would have jumped on the bandwagon. It was a temporary loss of pride which was soon returned at Hawi.

At the base of Hawi a relentless headwind picked up which found me barely pushing 13.3 mph on 240 watts (my climb wattage target). Nevertheless I made good progress compared to others who were now burned out from their initial jolt up Kuakini and I found myself moving up the field. At the turn I had averaged 22.4mph for 60 miles and some quick mental math told me with the net downhill return a sub-5hr bike split was absolutely in the cards. 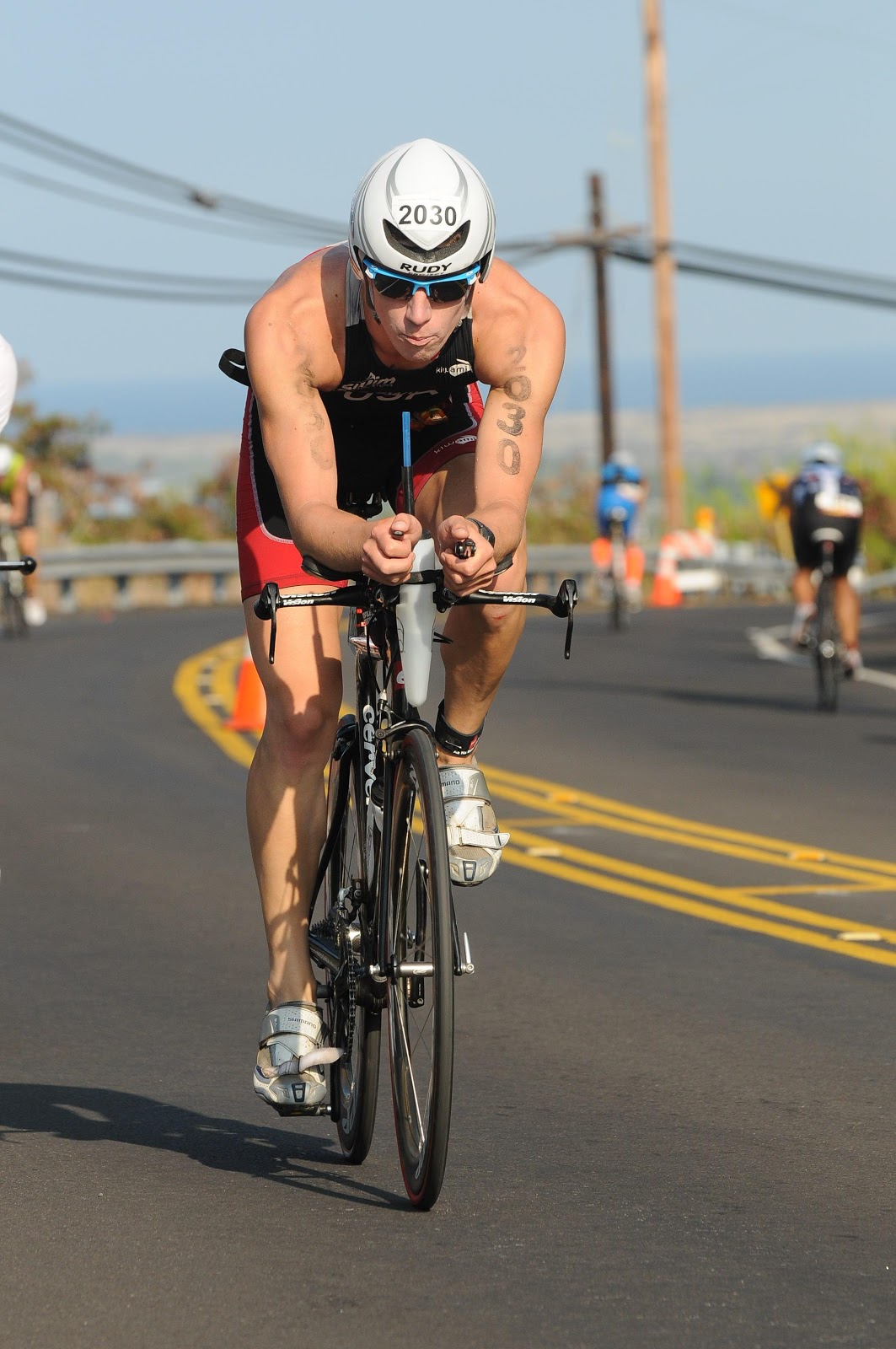 The ride down Hawi was disappointingly calm. I’m a technical descender and was hoping for some crosswinds to get my competition out of aero. I soft pedaled into Kawaihae, where the realization quickly set in that we’d have a headwind all the way home. I was feeling very good and made the executive decision to take a risk and up my power just enough to get me to town in under 5:15, the time I thought I’d need for a comfortable safety net for a sub-10 finish. I made very quick progress up the field, passing what felt like hundreds and flying into T2 in 5:14 with a 212w segment average and very happy to still have a shot at this thing.

side note: the refs on course deserve huge accolades as the wheel suckers were in full force on race day, and far worse than I’ve seen at any of my 3 IMs. I saw several red cards awarded in front of me and god knows how many who were hanging from my tail.

Since Lanza and Coeur D’Alene my primary training focus has been the run. For a first season riddled with injuries and your many, expected rookie mistakes – which saw me attempt, fail and finally learn to balance a full-time job and my passion, lose 4 weeks of training prior to Spain for a busted knee, as well as over train and race tired in Idaho – I was able to stay smart and healthy and build into 60 miles, averaging those 60 run miles/week for the 6 weeks leading into taper (keep in mind I only started running 12 mo’s ago). I came into this race confident in my progress and anxious to see it materialize.

The run mandate was to keep my HR below 150 and not exceed 7:30s until the energy lab. The goal was to average 8s but I’d been seeing 7:15s in the Kona heat so coach and I adjusted the strategy to account for both pace and HR variables. Heading out of T2, I was flying at 7:06min/mile with a HR in the low 140s, I quickly slowed to a 7:30 and soon found myself pacing off HR which had risen to 150 a few miles into Ali’i. The 15 or so miles into energy lab felt like a cake walk, I was sticking aggressively to plan, extremely confident that I’d manage to negative split and possibly break 3:20… then the heat kicked in. Kevin pulled up alongside me in his bike on the Queen K and I remember turning to let him know that I was overheating. My pace took a :30+ spike at my 150 beat HR cap, Amos Gollach flew past me, and my day turned into a mental battle to just finish. My mind carried me just far enough to have volunteers dump ~8 cups worth of ice in the front and back of my uni adding what felt like a solid 5 pounds of extra weight. Every aid station thereafter was a repeat of the process with the exception of one stop where I became so desperate I dumped my entire head and torso into an ice-filled garbage can. 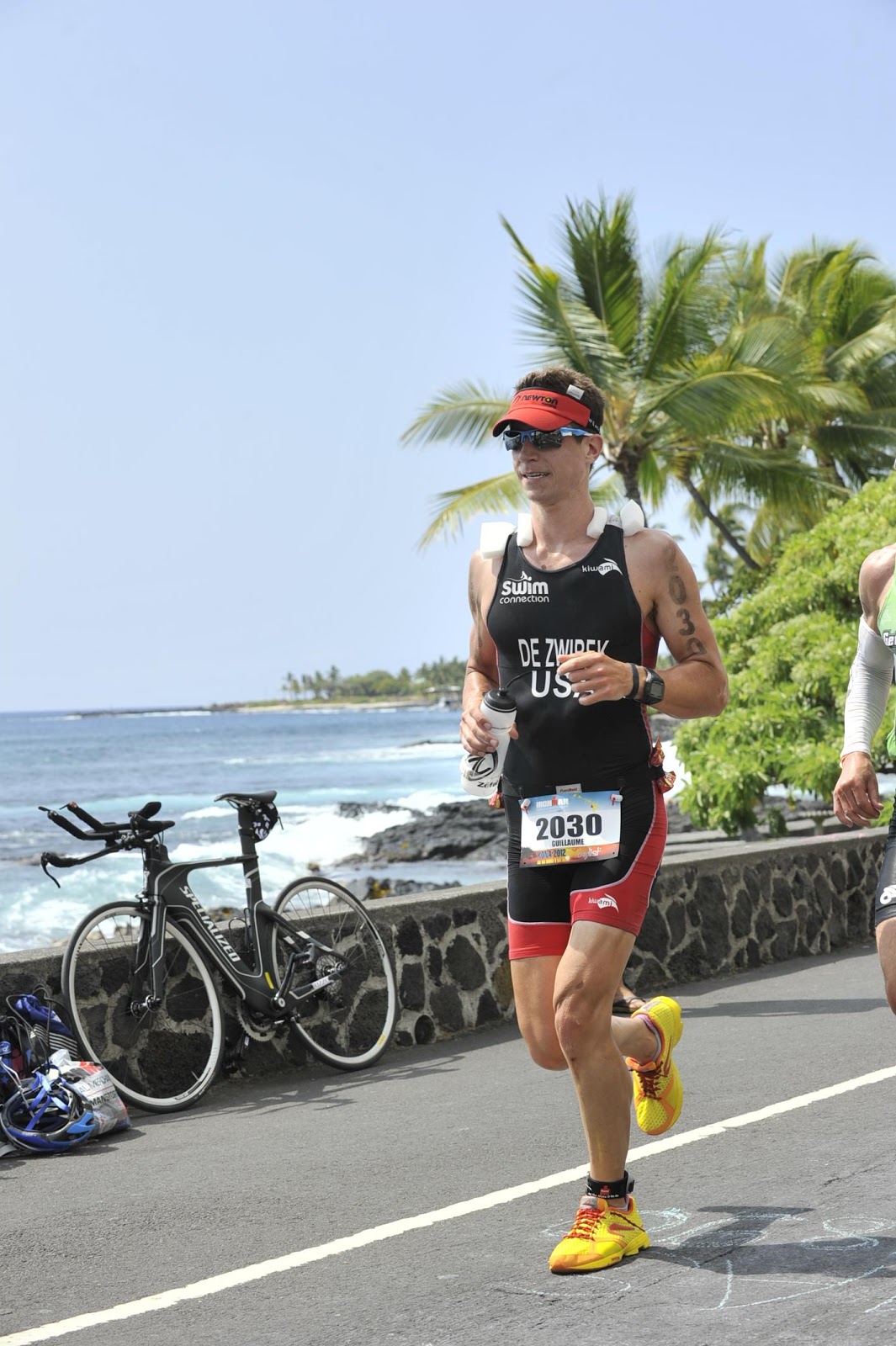 The 10k back into town is where this race is won. I had already been digging very deep for a few miles and a sub 9:50 (much less sub-10) was looking like a more and more remote possibility. I fought every urge to walk and Kevin managed to keep me pushing with his encouragement every couple miles: “you can still do this Guillaume, sub 9:50 is within reach!” and later “you can still get a good time, Guillaume. Keep pushing.” I don’t know what race clock he was looking at or who he thought was racing as (as we later learned) I was dangerously overheated and at that point struggling to keep 8:30s… my goals were slipping by the footstep. I tried to do the mental math to figure out what I’d need to hold to even break in under 10 hours but that simple arithmetic proved impossible… one foot in front of the other until ice. Repeat.

At the sports authority, I saw Kevin again and he told me to ditch the bottle and RUN. The way he said it I knew there was a chance but it would be close. I don’t know where I found the energy but I picked up the pace. My HR climbed into the 200s and I saw 6:30s climbing that final hill into Palani… I was passing people left and right and screamed down Palani at 5:36 pace. You’ll notice from my race file that the turn into Kuakini took me by surprise… there was no more gas, and one of my AG competitors managed to take advantage and pass me with just meters to the finish line. I stumbled across the finish and collapsed into a catchers arms who dragged me to medical where my internal temp was measured at 105.2° Fahrenheit. Two hours, an ice tank and two liters of I-V later I learned that I’d finished in 9:49:15th. 9th in my AG, and 250 overall with an IM and marathon PB. To give you perspective on the conditions out there, a 250 OA ranking would have been a 9:39:36 in 2011 and a 9:42:35 in 2010.

It was a really tough, windy day out there that began with a disappointing swim, a ride where my HR posted ~10 bpm above normal race average, and a run that saw me overcome serious overheating to make good progress up the field. Watching Harriet Anderson finish with seconds to midnight brought everything full circle. I love triathlon, I love training, I love racing and every sacrifice was and will continue to be worth it. I’m look forward to a tough 2013, a blossoming rivalry with Amos, and what I hope materializes into a shot at the AG world title next year. 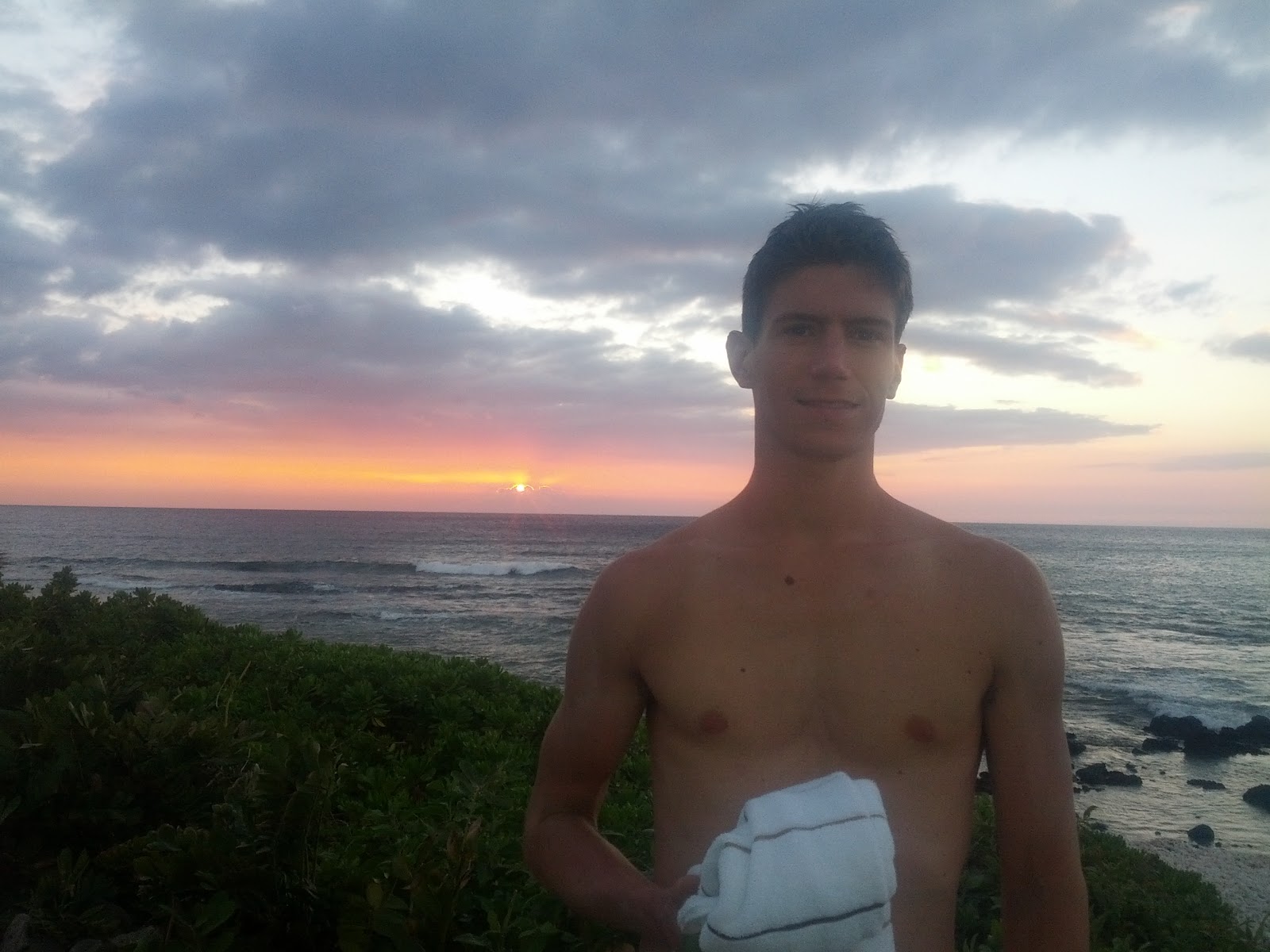